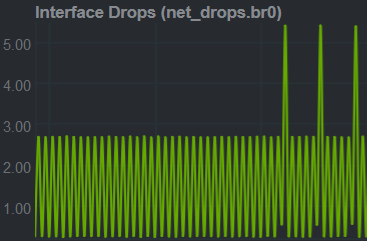 On my home server/NAS my LXD container usage has grown considerably over the last year. It’s come to the point that I felt the need to have a monitoring solution for this “datacenter”-in-a-box: The 1-2 dozen containers that encapsulate various server daemons all have their own virtual network interface(s) and LAN-valid IP addresses allocated by my LAN’s DHCP server which itself is also running happily inside one of the containers...

After a quick sudo apt install netdata (on Ubuntu 18.04 LTS) I was presented with a beautiful and almost overwhelmingly complete web-interface that tracked and visualized my rather complex setup in real-time (even including the UPS’s status), all that without one iota of config-editing. Nice.

My bridge is dropping packets

... at an alarming rate: 600 per 10-minute-interval. I wasn’t aware of any unexpected behaviour, but somehow the (software) bridge interface br0 that connects all my LXD containers’ NICs with the host’s physical NIC is making Netdata very nervous, i.e. it raises critical alarms. That’s no wonder though, its threshold for dropped incoming packets is a mere 5 per 10 minutes.

I was particularly intrigued by the fact that the rate of those dropped RX packets was a perfectly periodic 1 drop per second. This almost immediately ruled out the most serious reason for dropped packets, namely that the system is truly overloaded and simply can’t keep up with the deluge of packets it’s receiving.

Some searching turned up the following alternate explanations:

Confusingly, Netdata also complained about softnet backlog, but that’s unrelated in this case, since it can’t possibly explain the periodic nature of the packet dropping. (Solution: increase net.core.netdev_budget_usecs to 6000.)

Wireshark & tcpdump to the rescue, as always

A Wireshark capture executed on my laptop quickly turned up suspicious broadcast packets that would fit the “unknown protocols” mentioned above. Both packet types seem to be related to the smart home-capabilities of my ISP-provided cable modem, an AVM FritzBox 6490:

And indeed, tcpdump confirms that those packets are present on br0, but they’re not visible on any of the hosts (i.e. containers) connected to the bridge! Here’s how they show up on the bridge:

The final piece of the puzzle is to explicitly drop the unwanted packets before the bridge is dropping them in a noisier fashion.

In order to persist these rules across reboots I’m using the netfilter-peristent package which comes with Debian/Ubuntu. Unfortunately it does not (yet) support saving ebtables, so I’ve added a third-party ebtables plugin for netfilter-persistent (Thanks, Thomas Tsiakalakis!)

That’s all for today. If you’ve found this post useful, feel free to let me know.